Happens all the time, new dealer figures out a prop bet payoff but stumbles on subtracting the bet. Sometimes easy subtractions. There is a bit of humor in it.

​Dealer can compute 12 x 31 = 372 fast but stumbles subtracting all the one-roll bets this player threw at him. Let's say there is $55 in multiple prop bets....

The funny part is how fast the dealer multiplied 12 x 31. Because he read and understood 16/31 he nailed it which by all accounts is pretty impressive to the average player watching all this go down but stumbles on a subtraction? You would think the 12 x 31 would be the hard part, not the subtraction.

Some dealers will subtract 40 and carry the 2 in that example and that's fine also. It matters little to the parties concerned ie... supervisor or player how you get there so long as you are correct. This is money. Live, on stage, people watching you environment. Do not fuck up the math when it comes to money.

When you are standing on a craps table you don't see numbers like you do reading this.

​On a live game you see chips.

You do that one.

It's a little different.

​Let's do some more.


​Craps dealers don't add too much but if you do, consider adding numbers the same way.

Most of the mistakes I see when adding is when players win an all-day hardway and a hop hardway. They tend to merge them together into one single payoff. For example the player has $25 hard 10 and a $7 hard 10 hop. The all day pays $175 still up and the hop pays $217 which the player wants down. So the stick decides to add the 175 + 217 and spit out the answer for the base to deliver.

Some will simply say add $217 to that $175 you have in the COME. Which in my humble opinion is exactly the way to do it but some dealers for whatever reason decide to add the two figures together. Again, as a supervisor I would prefer separate payoffs so the player understands what each bet paid but that's me.

Do you see what I'm doing?

I remember when I dealt and was getting hammered on the stick, I would talk my way out, my players the box and base dealers could follow me along subtracting like this. Sometimes during a brain freeze and I needed to subtract say 145 I would subtract the 100 first, then the 40 followed by the 5. And it would sound something like this..."Okay sir, your win amount is $261 and you have $145 bet over here... 261 minus 100 is 161 minus 40 is 121 minus 5 will get you $116 and still up".

I've seen more dealing math mistakes with subtractions than with computing odds pay numbers. True. I've also noticed that single digit subtraction mistakes happen a lot. Well, not a lot but often. Like I said up there earlier, some dealers are good at this but many ...not so much. If that is you and it probably is reading this much of the page, concentrate on single digit adding and subtracting. It will go a long way and consider trying what I showed you.

Do dealers divide much? Yes and no. You do if someone says "Here, put these chips on all the numbers" and sets down all those red you feed him and all those white. You'll have to run all that down and perhaps divide by 5. You will do mostly simple divisions like when a player bets $81 inside and the dealer who isn't used to seeing that is dividing the 81 by 3 to get a clue before someone tells him or her. You will do some small division to insure proper Lay odds or something but not enough to break down a bunch of scenarios you may see.

So, that leaves us with multiplying.
Read how simple this game really is.
You have bets that get paid in odds at higher and lower rates of return. We know that.
Here is the bottom line.
All you need to master is this...
Huh? 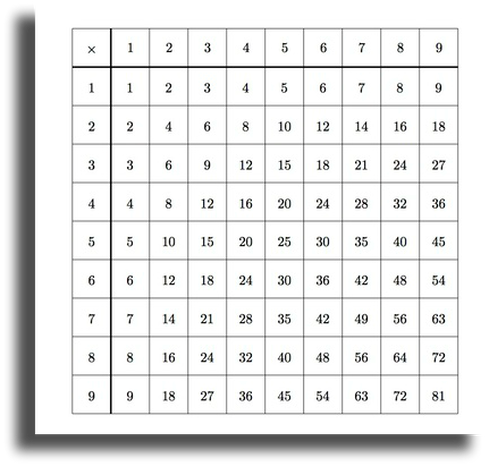