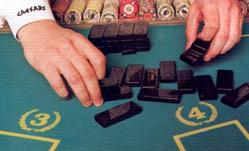 Pai gow is an ancient game played with 32 Chinese dominoes, also known as tiles, which form 16 possible pairs. The objective of the game is to beat the Banker's two hands, a high hand and a low hand, with your high hand and low hand. The first order of business in each hand is to establish who will bank the hand. The Banker can be any player or the casino.

A player who banks the game must be able to pay off all wagers during his stint as Banker (although many casinos allow the banker to share that responsibility with the house on a 50-50 basis), and must also have wagered in the previous round when the casino acted as Banker. The banking option is offered to each player in turn, rotating in a counterclockwise direction. Players are not obligated to bank, and if all players decline (as often happens), the casino banks the game. When the casino banks the game, its hands are always set according to a house formula for making hands. Players do not have to used that formula when they bank, and are free to arrange their hands any way they choose.

Play begins when the house dealer mixes the tiles and then creates eight stacks of four dominoes. After the players place their bets in the betting circles in front of them, the dealer shakes three dice in a cup and slams the cup down on the table (POW!) The number rolled determines which players receives the fist stack of tiles. To decide which player gets the first stack, the dealer counts counterclockwise from the Banker around the eight places at the table (so the Banker would get the first stack if the dice totaled 9 or 17). After determining where to start, the house dealer then gives out four tiles to each player, and the players arrange a high and a low hand.

Scoring
The value of a hand is based on both the numeric value and symbolic ranking of the tiles. To find the numeric value of a tile, count the right-hand digit if the total is higher than 9 (so a 12-spot tile has a value of 2). Also, as in baccarat, 9 is the magic number. You want to make your high hand and your low hand each as close to 9 as you can get them.

To form a hand, add the total number of spots contained on the two tiles, again discarding the left-hand digit of any two-digit total (If your tiles total 17, you have a 7.) When two hands have the same numeric value, the symbolic ranking of the tiles determines the winner. To find which hand is higher, take the highest ranked tile in each hand and compare them. Casinos have charts that show the symbolic value of the dominoes for this purpose.

To understand symbolic value, think of it this way: if blackjacks had symbolic value, it would mean that a black-jack composed of an Ace of spaces and any picture card or 10 of spades would beat a blackjack composed of an Ace of diamonds and any picture card or 10 of diamonds. The numerical value is the same for both blackjacks (21) but the symbolic value is different, since spades outrank diamonds. Of course, blackjack doesn't have that kind of ranking of suits (except during some promotions and tournaments), but pai gow does.
When two hands have the same numeric value and identical high tiles, it is called a "copy" hand. The Bank wins all copy hands. When two hands have a numeric value of 0, regardless of the high tile, the Bank also wins.

Arranging Your Tiles
Once the deal is complete and their high hands and low hands are set, players have to win both hands to win, or lose both hands to lose. Winning one, and losing the other is considered a push, so strategically you don't want to have an extremely strong big hand and a very week little hand, as this will usually result in a tie. You want to have hands that are relatively strong on the big and little ends. The top five hand rankings are Supreme Pair, Matched Pairs, Unmatched Mixed Pairs, Wongs, and Gongs (see Hand Rankings for a complete explanation).
When you receive your tiles, there are four easy steps to follow that will help you correctly set approximately 90 percent of your hands.

​
1. Look for pairs. Matching pairs are easy to recognize because the tiles are identical. Unmatched pairs like 5-2 and 3-4 are often overlooked, so if you're not sure what you have, ask the dealer.

3. Look for two small tiles that total 9 or less and play them together.
​
4. Put the largest tile with the smallest tile.
​
Ranking
How the hands are ranked is the complicated and there is no easy way to memorize the order. The highest hands are the matched pairs as follows. The highest pair, known as the supreme pair consists of the two wild dominos. Each of these wild dominos, known as "gee" may count as either 3 or 6 points if used individually. The Chinese name for the supreme pair is "Gee Joon" which is also the name of a restaurant in Binion's in downtown Las Vegas. 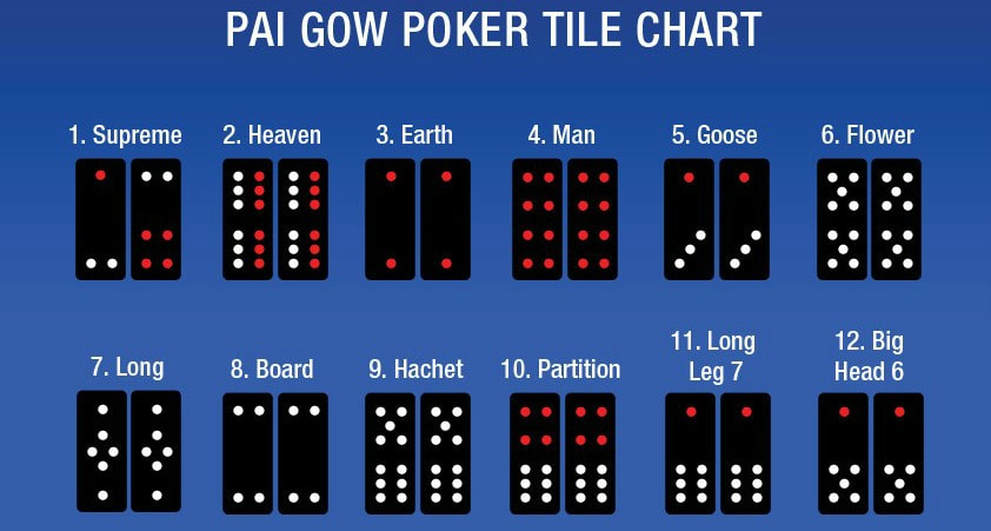