Being the floor supervisor that is responsible for ensuring the dealers know their table assignments is often referred to as being the "pencil" or "the supervisor that is running the rubber band." When things go right, sending dealers to their games is only a momentary distraction from your other duties. When it gets close to the end of swing shift and tables are being closed, dealers need to be re-assigned or EO’d, it will naturally be more demanding and often require some quick and calm decisions from you.

When things get really goofy, like when you empty an ashtray in the garbage can and then find yourself "borrowing" water bottles from customers so you can extinguish the fire you started; (like I did yesterday) that will be the moment the dealers come back from break and are standing there waiting for you.

Anyway, dealers are assigned to games using one of these two techniques or a variation of them:

Pre-assigned strings.
Every dealer has either a table assignment or they are a relief dealer for three games. These three games are grouped together to form a "string."
Example:
BJ-1 Smith
BJ-2 Jones
BJ-3 Lee
R Roberts
Smith., Jones and Lee will be working their respective games for the entire shift. Roberts will take the first break after ensuring that Smith, Jones and Lee found their way to their games. At twenty past the hour, Roberts will tap out Smith on BJ-1, who will take a break until forty minutes past the hour and then return to his game. Roberts will then tap out Jones on BJ-2 and work there for twenty minutes. When Jones returns, Roberts will tap out Lee on BJ-3 and work for twenty minutes When Lee returns; Roberts will take his break, before starting the process over again.

The advantages of having pre-assigned strings are: The disadvantages of having pre-assigned strings are:
A common variation is called the "round robin." There are still three dealers and a relief assigned to a three game string. But all the dealers on the string will work every game for an hour, with a break in between.
Example:
BJ-1 Smith
BJ-2 Jones
BJ-3 Lee
R Roberts
Again, Roberts will take first break after ensuring all dealers on his string; make it to their games. Roberts will then take out Smith on BJ-1 who, after taking his break, will tap in on BJ-2. Jones, after returning from break, will tap out Lee on BJ-3. Lee will tap in on BJ-1, when he returns from break.

The advantages of a round robin are that all dealers will work one hour on a game and then not come back to it for three hours and that there is only one tap out required per break.
To manage a round robin, it is important to make sure your new dealers understand that they will always be tapping out the same dealer. Which is the dealer that is listed after them, on the roadmap. When closing down games, a dealer can be assigned another game by merely scratching his game number and writing the new game number next to it. When a string is reduced to one game, that game can be added to a two-game string and then a relief is now free.

Creating a roadmap for pre-assigned strings.
A week’s worth of roadmaps are created, usually after the new schedule is made.. A supervisor other than the one that made the schedule often makes the roadmaps.
​
In order to complete the roadmaps you will need a copy of the schedule, a pencil and some blank roadmap forms. Using a copy of the schedule is preferable to using the original, since you will be able to mark on it. A pencil is always used since you want to be able to make changes as you see fit when completing the roadmap and to allow bosses to be able to make changes later, in the case of call-ins, for example. There may be only one roadmap form that is used everyday, or there might be different ones used, depending on how many games are to be spread. 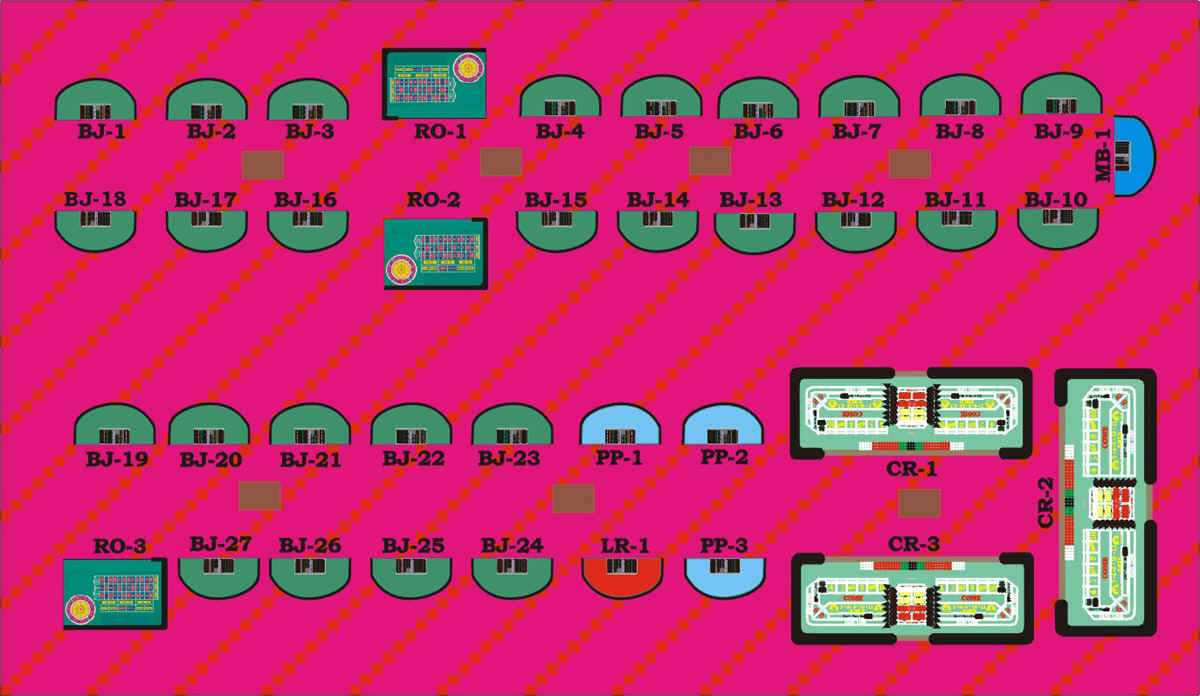 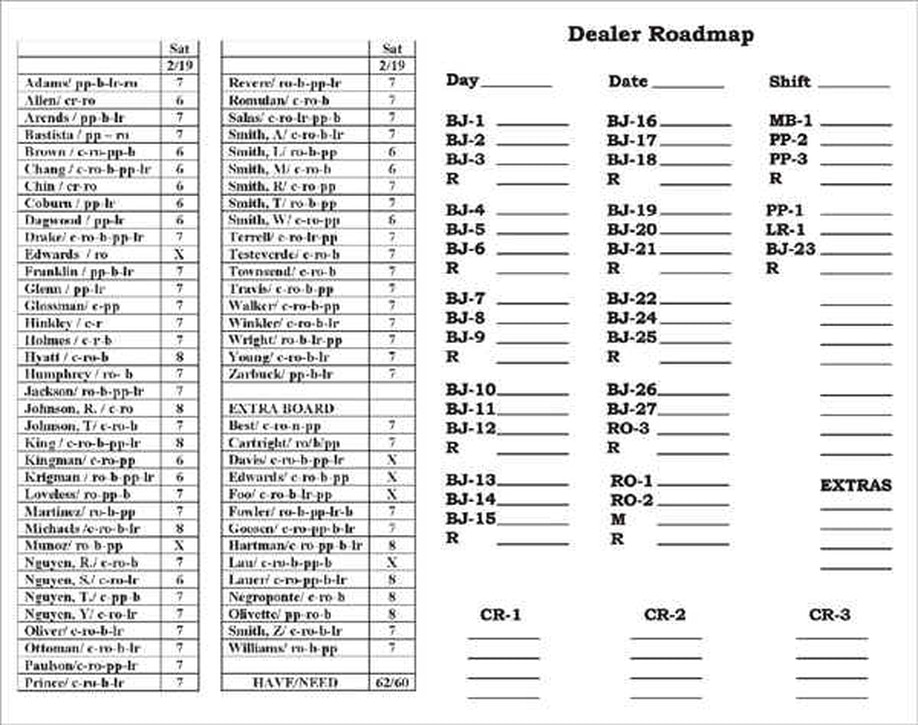 On the left is a single column from the date "Sat 2/19" broken into two halves for you viewing pleasure. Notice, on the bottom of the right half it says; "HAVE/NEED 62/60." This means that 60 dealers are needed to cover all the games scheduled, including the mucker on the roulette string. Since you "have" 62, two of the dealers will be listed in the "extras" section.
​
On the right is a copy of the roadmap that is used for Saturday nights. It is usually best to assign the craps dealers first, followed by whatever games there might be a shortage of skilled dealers for. Put a line through the start time of a dealer, after you have assigned him a game. This will help prevent you from assigning the same dealer twice. If the dealer has a late or early start time, make sure you write their start time after their name.

After completing the roadmap, count the number of dealers to ensure the total is correct.
Always be receptive to fresh ideas when it comes to assigning games. Like not putting chubby dealers on the games near the podiums, makes it easier for people to traverse the pit. Consider using multi-game dealers as extras and muckers because it makes it easier when it comes time for them to replace dealers being EO’d.

Extra dealers can be used as muckers, used for housekeeping purposes (straightening chairs, removing glasses and emptying ashtrays) or for giving extra "pushes." Extras give pushes by tapping in on a game that is one game ahead on the string of the game the relief is about to tap in on. The relief can then skip that game and everyone on the string will work a forty. 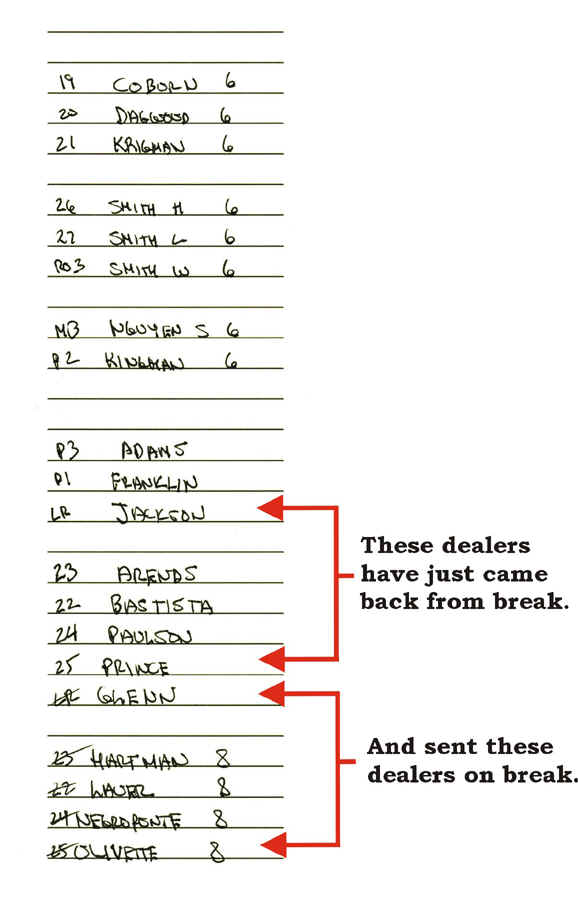 Running a rubber band.
The second method of assigning dealers to games is by "rubber band." A list is made of all dealers working on a shift or all dealers assigned to a pit. A rubber band or paper clip can be placed on the list so that it positioned directly above the next dealer that is due for break. For every dealer that returns from break and replaces the next dealer on the list, the marker is moved down the list, one name at a time.
Although using a rubber band style list is common practice, unless you are working in a very small pit, an actual rubber band or paperclip is often impractical. In the case of a larger pit; when a returning dealer is assigned, the game number is written to the left of his name and the game number of the dealer he is replacing, is lined out. After all dealers have returned from break, you erase the lined-out game entries and the resulting blank spaces indicate the dealers that are on break.

Creating a rubber band.
Rubber band lists can be created seven at a time and once a week or they can be created at the beginning of the shift. You merely start at the top of the schedule and work your way down. It is prudent to leave some occasional spaces, as they can be helpful if the need to move dealers around on the rubber band becomes necessary. Sometimes, it is helpful to list the games a dealer deals to the right of their name, so you know which dealers can deal roulette, baccarat and the carnival games.
Try to spread out your baccarat, roulette and carnival game dealers on the list, so there will always be some coming back from break. If you need a baccarat dealer among the dealers coming back from break and there are none; all you can do is have one of the returning dealers tap out a baccarat dealer (preferably from a fast-paced game like BJ and not a slow-paced game like pai gow poker) and have him tap in on baccarat.

In the beginning of your shift, when you start to close games and send dealers home and at other various times during the shift, you will need to compute your dealer to game ratio. Divide the number of games by three and add that number to the number of games. Example: if I had eighteen games 18/ 3= 6, 18 + 6 = 24 so I will need twenty-four dealers to cover eighteen tables. If you are dividing into a number of games that isn’t a unit of three; you will add one dealer. Example: nineteen games: 19/3 = 6.33, 19 + 7 = 26. And you not only have enough dealers, there will be two "forties" floating around.

If you are running hour and twenties or fifteen minute breaks, you divide the number of games by four.
When closing a game, you can have the dealer replace the dealer on the game you want to EO and write down his new game number. Unlike pre-assigned strings, you won’t have to be concerned with the dealer’s break, as his position on the rubber band will not change. If you are closing a game but don’t intend to EO a dealer, you have the dealer from the closed game send the next dealer due for break, on a long break. You need only have to remember that the dealer on the long break won’t be coming back with the dealers above him on the list, he will be coming back with the next group of dealers you send on break.
​
If you are running the rubber band and it is getting close to the end of swing shift, another consideration is having the late start dealers "fresh" (just returning from break) at the beginning of the grave shift. If your late dealers will be getting their break twenty minutes before the graveyard dealers come in, then no action is necessary. If you aren’t that fortunate but have extra dealers, you can have them tap out the late starts, instead of EOing more swing dealers.