As a dealer you probably have a pretty good idea that “Markers” are credit extended to players that have a pre-determined credit line with the casino. They are issued in units of $500 or in some smaller casinos, in units of $100. When a player asks you how to get credit you should direct them to the casino cage or call your pit or shift boss. Don’t answer any questions pertaining to what the qualifications are for credit or the length of time it takes to get approval, as this is the cage’s domain and you certainly wouldn’t want to give a player wrong information.

For the purposes of this chapter I need to distinguish between a “marker” and a “table marker. Again, a “marker” is credit extended to a player where the player signs a note promising to pay the casino a specified amount of money and is then given checks from the rack. A “table marker” is usually in the realm of a call bet in craps or a player that wants to double down on his $100 bet in blackjack but doesn’t have the checks in front of him. Odds are, you as a dual-rate supervisor will not have access to give a player a marker. Your casino will train you in the correct procedures however; you may be allowed to authorise table markers.

Handling table markers.
Of course the first consideration when a player requests a table marker is whether or not you the supervisor is going to give it to him. If this player has already flashed a huge wad of cash when he originally bought in, the answer is usually obvious: give it to him. Now you might be wondering what happens if this player refuses to pay. If you can tell your supervisor that you know for a fact that this player has on his person the money to pay the table marker, I can’t imagine you getting in trouble for giving it to him. It will be up to your supervisor and security to extricate the cash from someone who for whatever reason refuses to settle up.
Now suppose you haven’t seen a large wad of cash, what other factors might cause you to grant the approval for a table marker?
So now that you have decided to grant the player’s request for a table marker, the very first thing you do is “mark it up” with lammers or checks. It is absolutely crucial that we “mark up” the table marker before the dealer gives the player any checks, as this is the only proof we have that the player owes us money. In craps and blackjack setting checks or lammers in front of the paddle marks up the requested amount. Some layouts have circles indicating the player’s position. In roulette the lammers or checks are set on the wheel head. Lammers are always preferred, especially in blackjack or roulette. Sometimes a call to surveillance is required, either before a table marker is granted or as soon as possible afterwards.

In craps, the boxperson or floorperson will ask the player for the money to settle the table marker on the next seven-out. The player will not be asked before the seven-out regardless of how many checks he might have in his rack. In blackjack, the player will be asked to settle the table marker at the conclusion of the hand, after the dealer has collected all the cards. In craps or blackjack the dealer will say; ”Coming in against the marker!” and wait for approval before bringing in the checks.

There will be a “table card” for every game that has had CMS markers issued on it. It is a record that shows what markers were issued and/or paid back. Below is an example of such a card. Despite as a dual-rate you may not be authorised to issue a marker, you do need to understand this card for your table inventory. 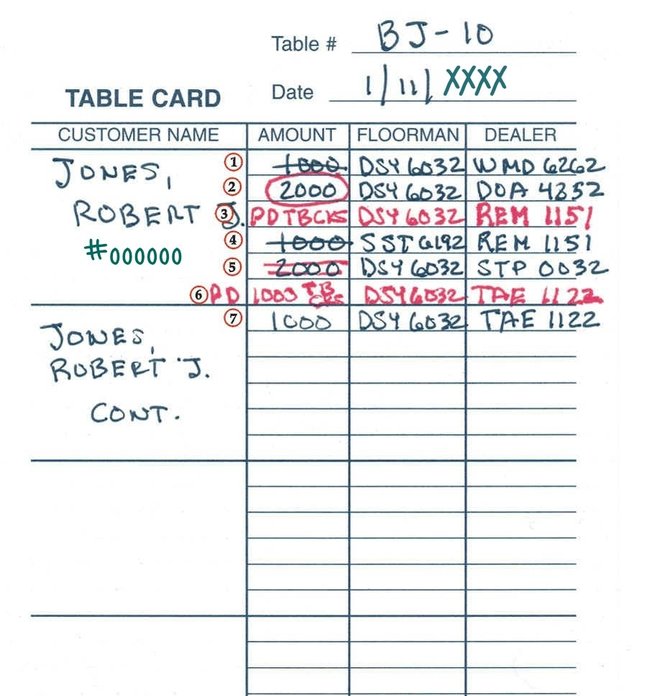 Entry #1 – Mr. J was issued a $1000 marker. As with all entries, the floorperson and dealer or boxperson put their initials and ID number.
Entry #2 – Mr. J took another $1000 marker, so his total markers went from $1000 to $2000
Entry #3 – Mr. J paid his markers back with checks. Marker paybacks are written in red with “PD TB CKS” meaning “paid table checks.” The previous amount being circled indicates the entire amount owed to this table was paid.
Entry #4 – Mr. J took a $1000 marker.
Entry #5 – Mr. J took another $1000 marker, which brought his total back to $2000.
Entry #6 – Mr. J paid back one of his $1000 markers with table checks. The two red lines in the previous entry indicate he only reduced his total owed, instead of paying the entire amount,
Entry #7 – This entry was made at the same time as the previous one and indicates that after Mr. J paid one of his markers, he still owed $1000. The fact that this entry caused us to run into the next section shows why it is a good idea to leave a blank section between players. 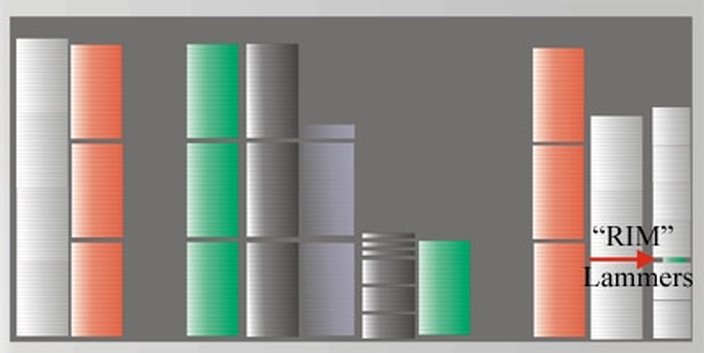 From chapter 2....Now while the RIM (markers) is always considered an asset to go towards a table’s rundown, there are some differences from casino to casino about how it is listed in a run down. Some casinos would just include the RIM with the drop others use lammers in the rack.