There is perhaps no other time of the day that a new supervisor’s lack of experience is more evident, than during the period of the shift when numerous table games are being opened or closed. The sense of urgency shown by the management team in "just getting it done" isn’t conducive to training new supervisors in the various skills and procedures needed to make themselves useful.

In this chapter, I will illustrate what is likely to happen when a "satellite pit" is opened and closed. A "satellite pit" is a pit that is separate from the main pit area and is usually opened at the beginning of swing shift to accommodate the expected increase in business. It will then be gradually closed towards the end of swing shift and completely closed before the graveyard crew shows up, since it is assumed that it won’t be needed and there won’t be the staffing to cover it.
​
Before you show up at Pit 2 (the pit you will be opening) there are at least three things that you will be needing: a key to open the games, playing cards and dice. Pit 2 has eight BJ games (all double-deck), one roulette table and one craps table. This means you will need at least eight red decks and eight blue decks, just to get the games open. If there is a scheduled card change during the shift, you will need twice that many. Plan on taking at least two extra decks of each color for replacement decks, so in case you discover a damaged card during play, you will have a deck ready to take a replacement card from.

Making sweat sheets for the games.
One of first tasks you should complete on you arrival is the creation of the sweat sheets. This task is simplified by the fact that the dealers have probably not arrived anyway. There are a total of ten games in this pit, so you would create two sweat sheets, of five games each. 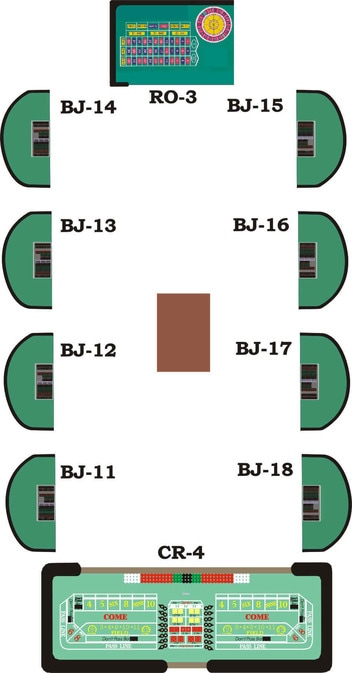 Even if your masters intend for you to watch this entire pit alone, there aren’t enough spaces on a typical sweat sheet to accommodate ten games. And even if there was, you want to be prepared in case the action gets heavy and they decide to send an additional floorperson. You could then give him one of your sweat sheets and he would be ready to take over that section.

You would copy the amounts for your sweat sheets from the amounts on the closers on the games. At this time it is useful to check the amounts (including the totals) on the closers for accuracy so you won’t need to do it when you are opening the games.
Make sure you have the table minimum signs set out on all games.

​Ashtrays and towels are sometimes a consideration also. If you have time, this is an excellent opportunity to complete your request for fill slips. Make sure you don’t actually order them until you have your games unlocked.

Checking the dice.
Perhaps one of your supervisors has already "miced" the dice and all you would need to do is check for miss-spots. But I will show you how to completely check a set of dice. Sometimes a call to surveillance is required before inspecting the dice.

It is common knowledge among casino personnel that the opposite sides of a die, add up to seven. However, when you are responsible for putting new dice on a game, your knowledge should run a bit deeper to how casino dice are supposed to be spotted.
​
Checking for miss-spots.

The very first thing you will do upon opening the wrapper is to insure all five dice have the same serial number! Remember, when you read a serial number, the five side of the die is on top. 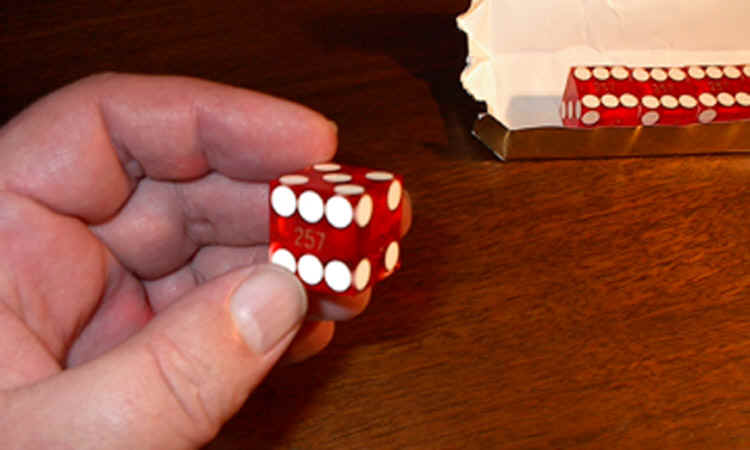 Hold the die in your left hand, with the five up and you should see the four on the right-hand side of the die. 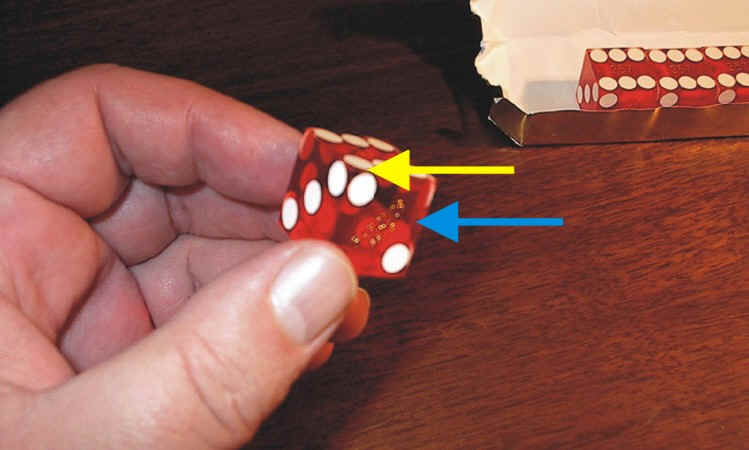 Turn the die away from you and should now see the "three" side on your left and the "two" side on your right. Notice (yellow arrow) that the spots run diagonally to the bottom left spot on the "six" side. The reason this is important is: a crossroader that brings his own dice into a game will often create dice where the two and three side spots run in the opposite direction, so he can easily spot his dice and remove them from the game before he leaves.
Make sure you check the logo (blue arrow) while you have the die in this position. 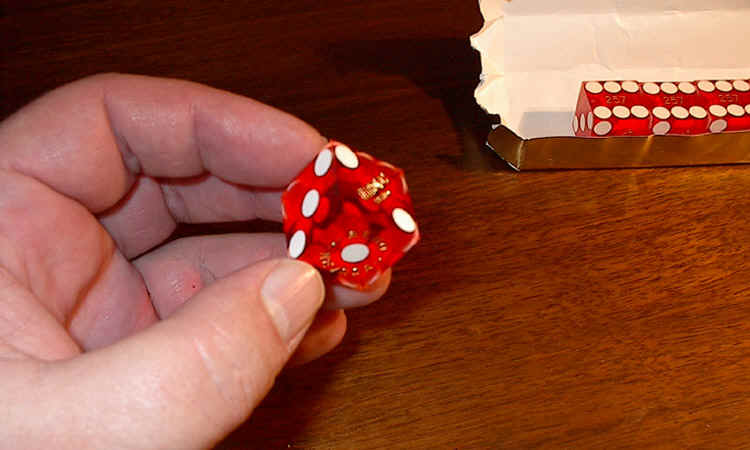 Continue to turn the die away from you until you can catch a glimpse of the ace on the bottom.

​Using the micrometer.
The three dimensions of each die are measured to insure that there is no more than 2/10,000th of an inch difference between each dimension. Any variance larger than that will create a "flat" or "brick" where two sides of a die will have a greater surface area and will cause those sides to be favored. 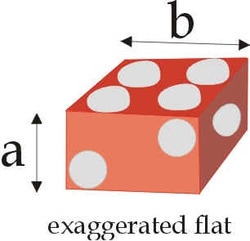 Since the length of "a" is much shorter than "b" it’s easy to see in this example that the three and four will roll far more often than any other number. A micrometer is a precise and delicate piece of equipment that must be treated with the utmost care. 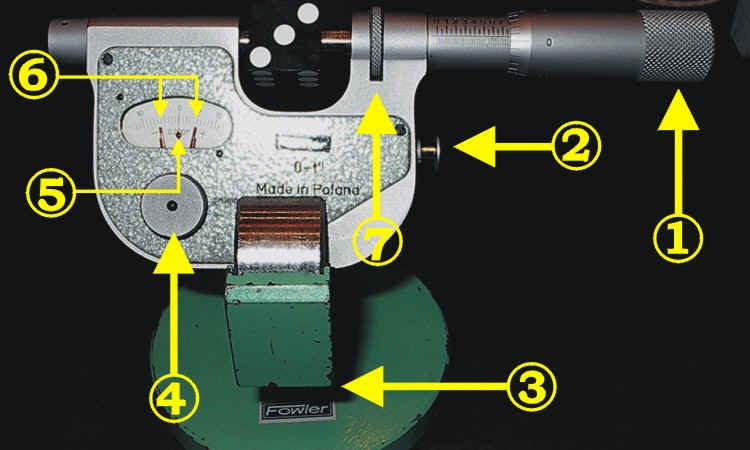 1.) The handle you will use to center the needle.
​2.) The button that opens the micrometer, so you can insert and remove the die.
3.) The stand that holds the micrometer.
4.) This knob will change the guide markers indicated by #6 above. DON’T EVER ADJUST THIS KNOB UNLESS YOU ARE THE CASINO MANAGER!
5.) The needle that indicates the variance.
6.) The guides that indicate the maximum amount of variance that will be allowed.
7.) This knob can be tightened in case needle fluctuates too easily. I personally don’t like to adjust it. 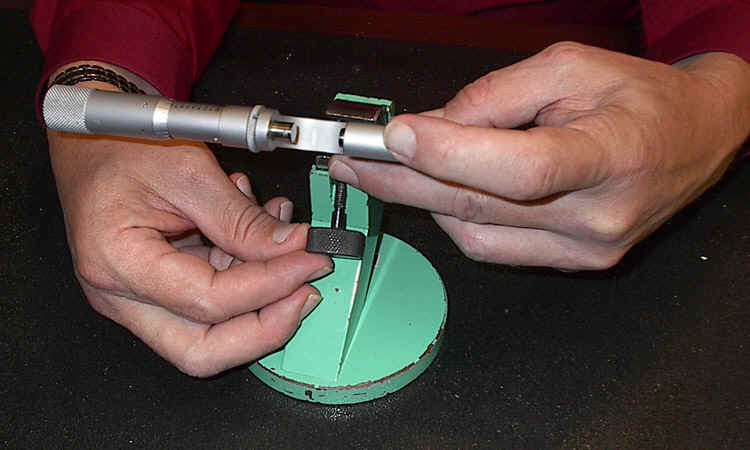 Place the micrometer in the stand and tighten down the knob. 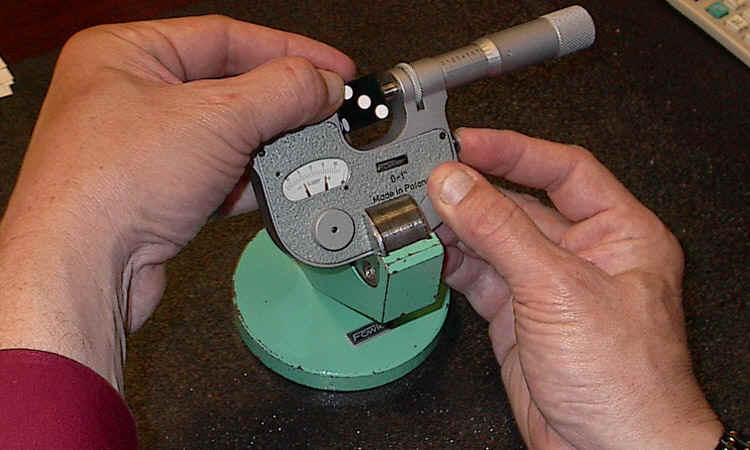 Push the release button on the right side of the unit and insert the die. ​If it won’t easily fit, then turn the handle towards you to make the opening bigger. 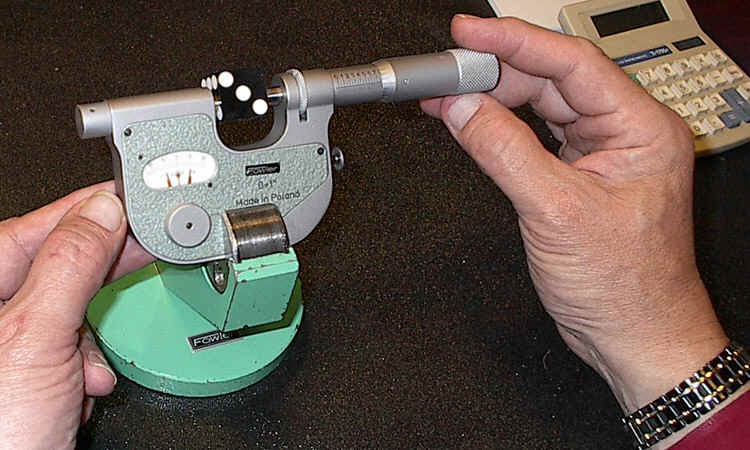 Center the needle. If the needle is towards the right, then the opening needs to be made bigger by turning the knob towards you. Never turn the knob away from you if the opening is too small or if you are unsure which way to turn the handle, as over-tightening will damage the unit. You can think of the handle as a bolt and the body of the unit as a nut. 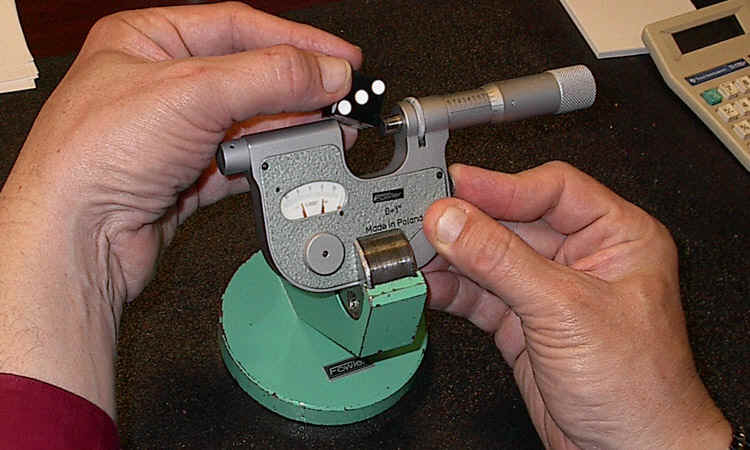 Press the release button, remove the die and turn it a quarter of a turn in either direction. 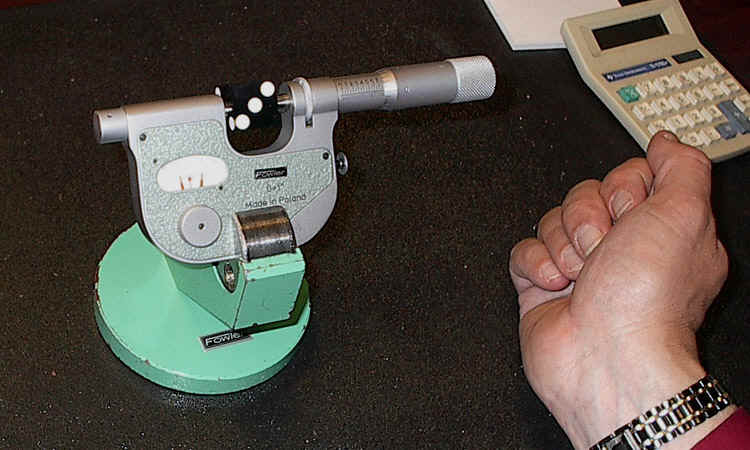 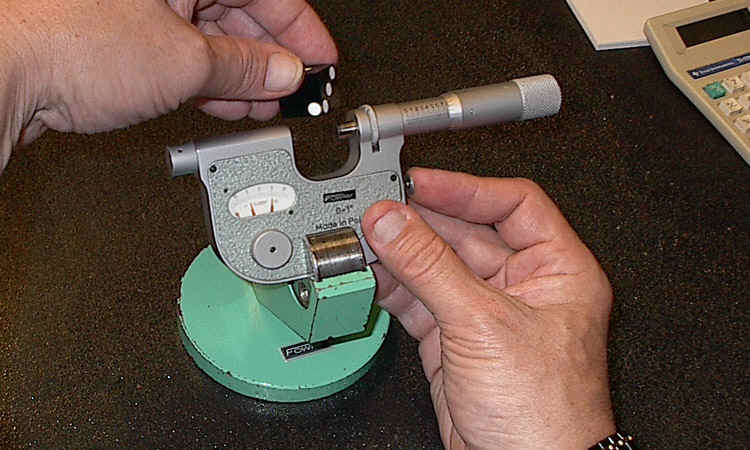 Push the release button and turn the die away from you so you can repeat the process and check the third dimension.
Remember that we don’t care what the thickness of the die is or whether the thickness of one die matches the others in the set. All we care about is that all three dimensions of a die fall within the maximum variance. 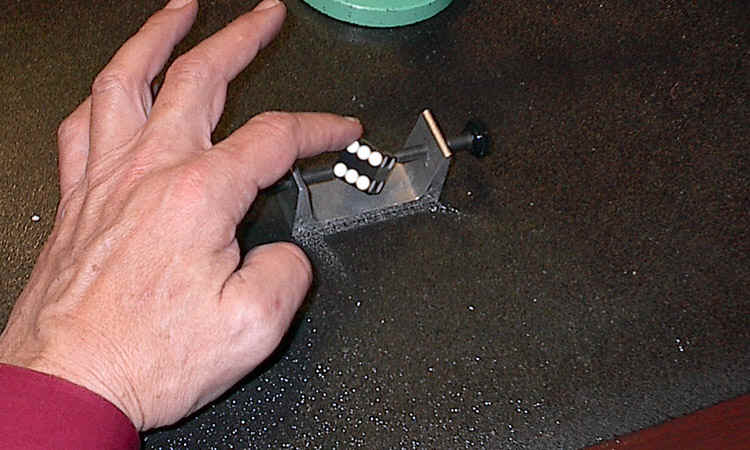 Dice can be checked for the presence of weighting by spinning them in a holder as shown. You would be looking for an unnatural spin, where the die might seem to "lurch" at a certain point in the spin. When the die stops spinning, it is natural for it to possibly reverse direction slightly.
​
Checking for flat sides. 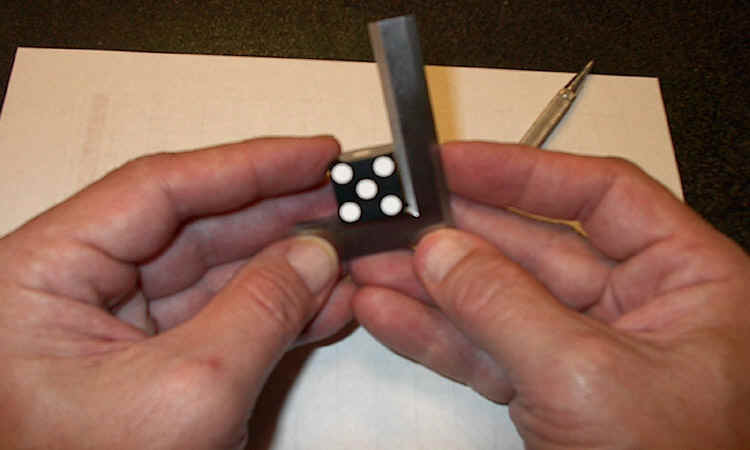 Some casinos use a square to insure that all sides of a die are flat and not beveled (convex or concave). The square should rest against the entire side of the die and not leave any gaps.
​
Scribing the dice. 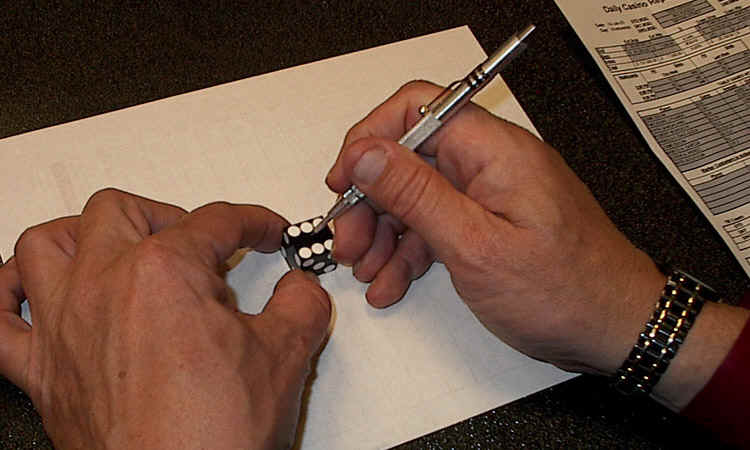 A scribe can be used to put a secret mark on the dice. If done, don’t dig too deeply into the die. A light mark is all that is required. On the inside of the dice wrapper you will write: the dice number, the date and time, your initials and ID number and the game number. You will write the serial number on the sweat sheet, usually in the drop section.
Now that you have prepared the sweat sheets and checked the dice, you are ready for the dealers to go on their games.

At this point you will call surveillance and identify yourself and tell them you are opening all games in pit 2. In your haste to get the games open, don’t forget the number one rule: don’t break of any keys in the table lids! Make sure you have the stub of the round key lined up with the slot.

On the craps table, make sure you have the inside of the lock lined up, before inserting the key completely in. Don’t force any locks! If you are unable to get a lid unlocked, don’t hesitate to call the pit or shift manager. Believe me when I tell you, they would rather have you interrupt whatever they were doing at the time, than have you inform them that you broke off a key.

Since the dice have been checked, the logical game to open first is the craps table. After removing the lid, the first thing you should do is put the paddle in the drop slot. This will prevent you from accidentally knocking checks in the drop slot.

Next, I would open the roulette table. Since the bankroll has already been checked, all that needs to be done is to inventory the chips and check the wheel for balance. On a piece scrap paper, write down the number of each non-value chips by color. Remove any extra chips, except for one each per color (needed to mark-up the value) and put them in the podium. This is done so the dealer and you will know if any chips are missing during play.

To check the wheel head: spin the wheel very slowly so you won’t have to wait long for the wheel to stop. The moment you are waiting for is the instant the wheel head stops. The moment it stops, it should reverse direction a couple of degrees, before stopping altogether.
Continued Click Here
Chapter 5 Part Two